Interstate 95: Its problems and challenges 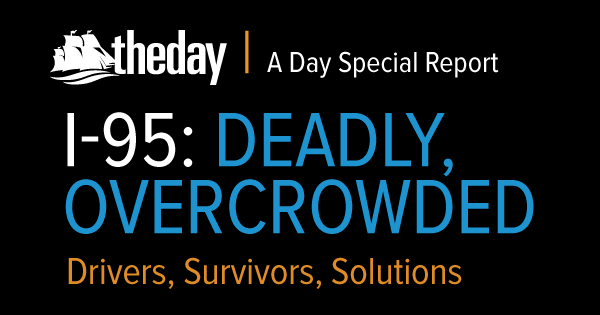 Interstate 95 is a fact of life on the East Coast. Drivers passing through the Northeast can barely avoid the state's 112-mile portion of I-95. Connecticut's section of the interstate is one of the most congested of any I-95 state and has one of the highest densities of exits. Using state and federal data pertaining to highway usage, accidents and safety, The Day has examined I-95's problems and challenges.

Stonington voters should vote Oct. 5 to allow marijuana business in town, because they would make money on it

State police said they charged a 15-year-old boy from Middletown with stealing a car from Madison, speeding away from police and causing an accident with two other vehicles.

The Board of Selectmen approved a motion to hire Attorney Jay Levin of Suisman Shapiro Law Group for $24,000 to advocate at the state level for more access to the state-owned Waterford Parkway.

An 18-year-old Storrs man died in an early morning crash Monday in the area of exit 73 on Interstate 95, state police said.

Connecticut Department of Transportation spokesman Kevin Nursick said the $142 million project, which is expected to take three years to complete and originally slated to begin this year, has been pushed out to 2023.

Two people transported following accident on I-95 in New London

UPDATED: Man killed in three-car crash on I-95 north in Stonington

A Boston man was killed and a Cranston, R.I., woman was injured in a three-car crash that closed northbound Interstate 95 for hours.

A man was injured in a motorcycle crash on the Gold Star Bridge in Groton Sunday night.

Firefighters extinguish a brush fire on the right shoulder of I-95 southbound in Groton on Monday.

According to his obituary, George Cardono died Tuesday at the age of 88, the Providence Journal reported.

An 18-year-old woman was taken to a hospital via Life Star helicopter after crashing into a tractor-trailer on Interstate 95 north in Stonington Monday night, police said.

Crash involving tractor-trailer closes section of I-95 in Stonington

A section of the northbound side of Interstate 95 was closed Monday night due to a crash involving a tractor-trailer and another vehicle, according to the state Department of Transportation.

The state Department of Transportation has announced three upcoming projects.

The crash was among three on I-95 involving fatalities that Rhode Island state police responded to within 18 minutes early Sunday morning.

Police arrested a Bridgeport man Thursday after thye say he grabbed the steering wheel of the car he was riding in, causing it to swerve on Interstate 95 while an infant was in the car.

It's been an unusual year in some ways, but 2020 is status quo when it comes to campaign sign shenanigans.

DOT is repairing the bridge carrying Vauxhall Street Extension over I-95 in Waterford and New London.

A woman was charged with driving under the influence of alcohol or drugs after a state trooper spotted her driving the wrong way on the Gold Star Memorial Bridge early Friday morning, according to police.

Truck drivers were treated to free lunches Wednesday afternoon at the rest stop in North Stonington, as a thank you for their tireless efforts to move essential products during the COVID-19 pandemic.

Guns seized, man charged after road rage incident on I-95 in East Lyme

Police seized two guns from a Woodbridge man after a road rage incident on I-95 in East Lyme Friday, police said.

State traffic down 50% on average during the pandemic

Fewer cars has led to a host of impacts for the state’s transportation system, such as allowing crews to work more efficiently on construction projects. But it also means fewer gas tax dollars for the Special Transportation Fund.

The lack of bright, crisp, readable signs seems to urge visitors to keep moving along, instead of inviting them to exit and stay awhile.

I-95 problems: Be part of the solution

Since driver behavior is one factor that can be controlled on the overcrowded highway, why not start with that?

Connecticut has to repair its transportation system. Constitutional amendment needed to assure revenues not redirected.

Not just the drivers

Unless drivers reserve their poor driving for that stretch of highway, the highway itself is a contributing factor.