He’s a natural, for sure.

Son of a Providence Journal Co. printer, Tim Cotter was little more than a tyke when he started devouring the newspapers his father brought home. When he was 12, he thought he'd pursue the business – as a journalist.

Nearly five decades later, Cotter, The Day's managing editor, is about to be inducted into the New England Newspaper Hall of Fame, an honor reserved for "newspaper industry heroes whose talent, hard work and exceptional accomplishments provide inspiration to all New England journalists."

Described as "a guiding light in The Day's newsroom," Cotter, who joined the paper in 1989 after a stint with a string of southern Rhode Island weeklies, has served The Day in a variety of editing positions, shepherding award-winning content produced by the dozens of staffers he's mentored. 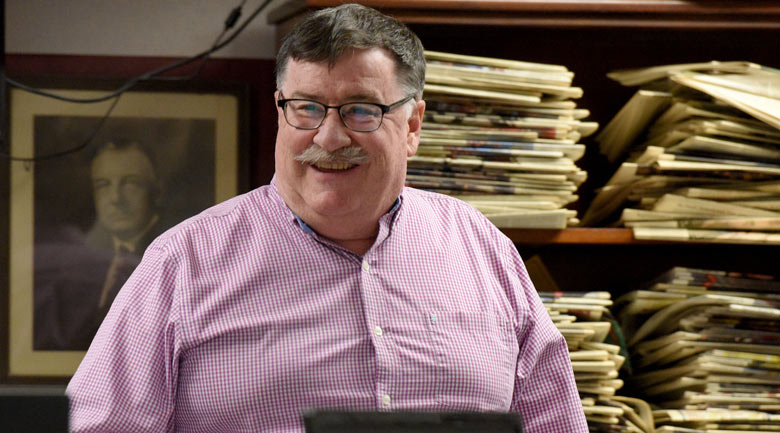 "His hiring decisions, his grooming of young reporters and his leadership of veteran staff has kept The Day a quality publication in an uncertain age," Gary Farrugia, The Day's publisher, and Timothy Dwyer, executive editor, wrote in a letter nominating Cotter for the Hall of Fame. "Whether it's breaking news ... or Sunday stories probing hiring at the Electric Boat shipyard ... or investigative pieces (about) declining school populations, mortgage fraud, or chronicling the local pain of the national heroin epidemic, Tim directs, encourages and oversees staff to produce quality work."

During Cotter's 10 years as managing editor, The Day has been recognized in its circulation category as the New England Newspaper & Press Association's Newspaper of the Year eight times. Six of the enterprise projects he's edited have won NENPA "Public Occurrences" awards, emblematic of the region's best newspaper work.

In an interview, Cotter recalled that as a child – the fourth of six brothers – he would read The Providence Journal in the morning and then one of the two copies of the Evening Bulletin his father would bring home later – "one for him and one for me."

"I thought it was kind of magical he would leave every morning and come home at night with this thing he'd helped produce," Cotter said.

While his interest in newspapers came from his father, his mother supplied his reporter's sense of curiosity.

"Everyone she met, she wanted to know their story," he said.

After majoring in journalism at the University of Rhode Island, Cotter launched into a New England newspaper career that now spans 38 years. He and his wife, Betty, whom he met working at a newspaper, have three grown children.

After early turns as a sports reporter and editor at the weeklies, Cotter focused on local news.

"I never dreamed of being a foreign correspondent, like some do," he said. "I love meeting people in the community and being part of their stories – the stories that are important to them."

Editing those stories remains his passion.

"My favorite is editing the (page) A1 Sunday stuff on Fridays," Cotter said. "I love editing a story – working with the reporters, photographers, page designers to make it the best it can be."

He's most proud of the people he's hired at The Day over the years.

"I've always looked for storytellers," he said. "We have a newsroom full of them now, and there have been many who have gone on to bigger and better things."

One who did, Ted Mann, a reporter with The Day from 2003 to 2011 and now with The Wall Street Journal, recalled in a tribute that Cotter "was the editor who assigned me the first story I didn't write for a newspaper." It happened during Mann's tryout at The Day, during which he spent "a few increasingly desperate hours trying to pull together a story on the ongoing, already well-covered efforts of a pair of local promoters to bring a cruise ship to the city."

Mann "summoned the nerve" to tell Cotter there was nothing new to report.

Saying little, "with perhaps a bit of a twinkle in his eye at the notion of a job candidate turning down an assignment," Cotter "... listened, and then took my word for it – there was no story there," wrote Mann, for whom the next assignment proved fruitful.

Despite the changes that have transformed the industry, Cotter, the first editor of The Day's website, said journalism's basic tenets are the same. "It's still storytelling," he said, be it in print or online, with or without audio or video, or via a podcast.

There's one change Cotter's sanguine about.

"We don't have the obligation to be a paper-of-record anymore," he said. "We're not recording history (just for the sake of it). We have the freedom to be more interesting. ... It's more fun to be interesting."

In a Cotter-edited paper, look for the storytelling.