Docking some time on the Mystic River

Two men were collecting anchors onto a floating dock Thursday on the river in downtown Mystic.

But Gov. Ned Lamont says he's not yet ready to ease restrictions on restaurants and other businesses.

The local police union president calls the commentary on its website free speech protected by the First Amendment.

A scene to graze on in East Haddam

In a country idyllic scene, a horse was grazing Thursday in a pasture along Foxtown Road In East Haddam.

Workers with Wiese Construction were working on demolishing the 1830 granite mill building Thursday on the Yantic River at the Uncas Leap Heritage Park.

The Connecticut Association of Boards of Education shared their priorities in a meeting with The Day Editorial Board on Thursday.

The official end of the Christmas season was noted in Preston on Jan. 6 when parishioners from Saint James Episcopal Church and sister church Grace Episcopal in Yantic, gathered on the Saint James grounds for a ceremonial bonfire to honor the...

The following local students have made the dean’s/president’s list at their respective schools.

Temperatures forecast to drop over the weekend

Braving the low temperatures Thursday, some men were spending time shellfishing in the Niantic River.

Preschoolers were trying to catch snowflakes on their tongue Wednesday at the Stonington Community Center, known as the COMO.

While public school systems across the region bounce betrween hybrid and all remote learning, Pine Point and St. Michael schools continue with in-person learning every day.

Nominee for U.S. secretary of the Interior visited Mohegans in 2019

Local tribe's leadership was favorably impressed with Rep. Deb Haaland of New Mexico, one of the first two Native Americans elected to Congress in 2018.

Laurie Taylor was out of work for a while due to the pandemic, so she decided to create a garden behind her Groton apartment. 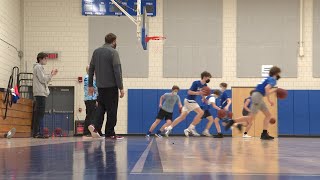 Arrests by local and state police in the region.

A driver reportedly hit a vehicle in downtown New London Tuesday evening and then left the scene, according to police.

The judge, who is 69, will reach mandatory retirement age in June, beginning a lifetime pension of...

A new report also notes that “continuing challenges” with the computer-aided software tool that Electric Boat is using to design the Columbia subs pose the risk for cost overruns and delays.

The company has reported more than 600 cases since the week of Thanksgiving.

Who among Connecticut military personnel has received the COVID-19 vaccine so far?

Submarine crews and National Guardsmen, who’ve been at forefront of the state’s response to the pandemic, are among the first military personnel in Connecticut to get vaccinated.

Docking some time on the Mystic River

Temperatures forecast to drop over the weekend

A scene to graze on in East Haddam

Amid sunshine, visitors take to boardwalk in East Lyme

On Wednesday, a window opened; for the next two years, Democrats can expect to hold the White House, the Senate and the House. The question for Murphy no longer is where might he go next but what can he do now.

Massachusetts will begin to ease some pandemic restrictions on businesses as spikes in the number of hospitalizations and new cases of COVID-19 have begun to slow, Gov. Charlie Baker said Thursday